Don’t Stress About Christmas: An Interview With Mark D. Roberts 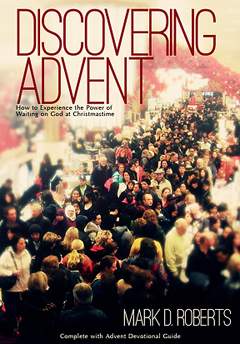 Mark Roberts is the former writer of our Daily Reflections here at The High Calling and author of the ebook Discovering Advent from Patheos. Mark is a good friend, a good leader, and one of my primary professional mentors. And Mark is a complete fanboy about Advent.

Recently, we spoke with Mark about his new ebook Discovering Advent and staying focused during the mania of the Christmas season.

You know, American culture is about productivity and effectiveness and efficiency, getting more with less effort. I think some of the things that have made our lives better and quicker, like washing machines, also contribute a sense that we need to hurry along.  So much in life is oriented that way. I don’t know that we’re unique in the world, but I think we’re certainly one of the fastest cultures there is. Most of us are raised in this kind of culture. It’s more acute in urban areas, and that increasingly is everywhere. I think it’s been sped along, if you will, by the Internet and the ability to get things instantly, like an eBook. You don’t have to go anywhere. With about three clicks of a button, you not only purchase the book, but in just a few seconds, you can literally have it and read it. Now, that’s not waiting.

And so we all have so much to do all the time. So, what do you say to the stressed out people who read your book and think, “For crying out loud, now I have to do something else to get ready for Christmas?”

Well, I suppose one could approach Advent that way, but that would be, you might say, walking backwards into Advent or running right through it without stopping. If somebody pauses a few minutes each day to think about waiting on God and what it is to wait for Christ to come, and if individuals or family and friends gather round an Advent wreath for ten or fifteen minutes to celebrate together, I suppose that is adding something into life. But, I think the net result is a slowing down and maybe even gathering a bit of perspective in order to make better choices about how we live, so that we might be a little less stressed out and a little less crazy in the season. But, Advent can also help us discover ways of being in God’s presence even in the midst of craziness. As you know, the story that frames my book is my own experience of God’s presence in the middle of a busy, crazy, crowded checkout line.

I think if we let the themes of Advent penetrate our souls, then it’s possible to experience much of life almost sacramentally, by which I mean all the different forms of waiting that you mentioned and some even more profound, gut-wrenching waiting. Waiting for a child to return from war, or people who are waiting to have children and can’t, some of really the deep yearnings of our life. I think if we can allow the perspective of Advent to flood in, we maybe can begin to experience those forms of waiting as being with God and even as a waiting for God in a different way. That gives our lives a kind of richness and depth that they wouldn’t have if we’re simply focused on waiting for whatever specific result we want.

That’s a good answer. Shifting a bit, your first Advent devotion focused on the coming of Jesus, the Good Shepherd. When I read that I was immediately thinking of the shepherds watching their flocks by night. They were at work. And, when we talk about Jesus the Good Shepherd, we are defining Jesus in terms of a vocation. What does that teach us about the Christmas season and our work and our Savior that He is defined vocationally in this way?

I actually haven’t thought about that before. But, isn’t it interesting? God is revealed in the Old Testament in terms of images of work. Now, God is revealed as Father, and that might require work, but that that’s not the primary sense of it. But, God is also revealed as King, sometimes as Warrior, and as Shepherd. Jesus is the Good Shepherd. Those are working roles. So, your question is, “What does that say to us?”

Well, it certainly begins to break down any division we might have between the spiritual stuff that “really matters” and then real life that’s material and has to do with work and effort. If Jesus is the Good Shepherd, we relate to him in the image of the workplace, and that certainly is affirming to work. I’ll leave it there. I think that’s a great connection.

So, what are some tangible ways we can celebrate Advent as we’re going about our daily work?

Of course, that’s going to vary with the kind of work we’re doing. If you’re a teacher, you probably ought not to be playing Advent music in class, or even, in a public school, not talk about God too obviously. So, there are limits.

But I think we can always find time when we’re either alone or with our families or close friends, time to reflect upon God and to invite God into our lives and to offer ourselves to Him. Then, it’s possible, though not easy, but it’s possible to live for God and live more consciously in his presence, no matter what we’re doing. So, think about the teacher grading a stack of tests. When I’ve been a teacher, that was one of my least favorite things. Maybe there’s a way to experience God in that.  If one is a salesperson, one could perhaps experience God in the context of the relationships involved in sales.

In any kind of work, there is also a waiting that may very well provide an opportunity for us to think about Advent and think about waiting for the Savior, rather than just being frustrated in our work or cursing it or the other things we might be inclined to do when we’re forced to wait in the context of the workplace.

You say Advent reminds you to help the hungry and the homeless. That’s sounds like something out of Charles Dickens’ A Christmas Carol. What do you think of Dickens as a tool for Advent?

I have to confess that one of my Advent disciplines, although you may not want to call it that, is to read A Christmas Carol, which I have done every year for the last ten or fifteen years. One could say, “That’s not very Christian or very Adventish.” But, really, it could be in a number of ways. There is the obvious moral of caring for the poor and generosity and having compassion. But, as you read the story, you’re familiar with it. For most Christians, the big story of Advent and Christmas is familiar to us in the same way. None of us are going to be surprised that we’re celebrating the birth of Jesus. In fact, we know in advance where he’s going to be born. So, Advent is a kind of a reliving of a story that we’re quite familiar with.

When I read A Christmas Carol, part of the delight in it is being able to read with a sense of where it’s going, being able to see little pointers that hint toward the glorious end. So, there’s a kind of joyous waiting. I don’t think I’d like the story if in the first stave Scrooge converted and all was well. That would be a very boring story.  In the waiting and in attending to the story, an expectation develops in the reader, which then brings great delight when the story concludes.

In a way that’s like Advent, because we’re waiting for Jesus to be born, and course, we know he was born. But, we are also waiting for his second coming, and we don’t know exactly how that’s going to play out. Yet, we are confident that God is writing the best conclusion to the story, so wait with expectancy and even with joy.

Creation and New Creation examines the doctrine of creation alongside new creation.

By Marcus Goodyear. Published by The High Calling, November 25, 2011. Image by Julie Jablonksi. Used with Permission.

© 2011 by The High Calling and the Theology of Work Project, Inc.