Looking Back at a Decade of High Calling

In just a few weeks, we'll finish merging HighCallingBlogs.com and TheHighCalling.org. A look back at our history seems in order. The original site grew out of Howard Butt’s radio encouragement, The High Calling of Our Daily Work®. These sixty-second encouragements to people in their daily work were received enthusiastically when they first aired in 2000. We wanted a place where people could “go deeper” than the one-minute radio message afforded. Educating the laity about their role in the Church has been an emphasis of Howard Butt for more than sixty years. We decided to take advantage of the breadth of contacts and the immediacy of the web to communicate his vision more completely.

The next step was to decide on a format. With plenty of pushing, prodding, and promoting, the advisory council helped us. We decided on a themed approach. Each week, one audio message posted. Along with the audio messages, a Biblical reflection and a personal reflection based on the theme of the audio message went live.  Since the first week in January 2002, this basic format has been the cornerstone of TheHighCalling.org. Over the last nine years, we’ve included other features such as interviews, Wisdom from Howard E. Butt, and Ramblin’ Dan.

We added the Wisdom and Ramblin’ pieces in 2005 to capitalize on the blogging craze. Most of our online audience didn’t know what a blog was at the time. We weren’t that far ahead of them. Actually, we soon realized that our “blogs” didn’t really act as blogs but more like columns. We didn't redesign the site for the first time until 2006. By the time we realized we needed to update, we had another two years of planning and building ahead. It was during this period that Marcus Goodyear and Gordon Atkinson hatched a plan for a blogging community. 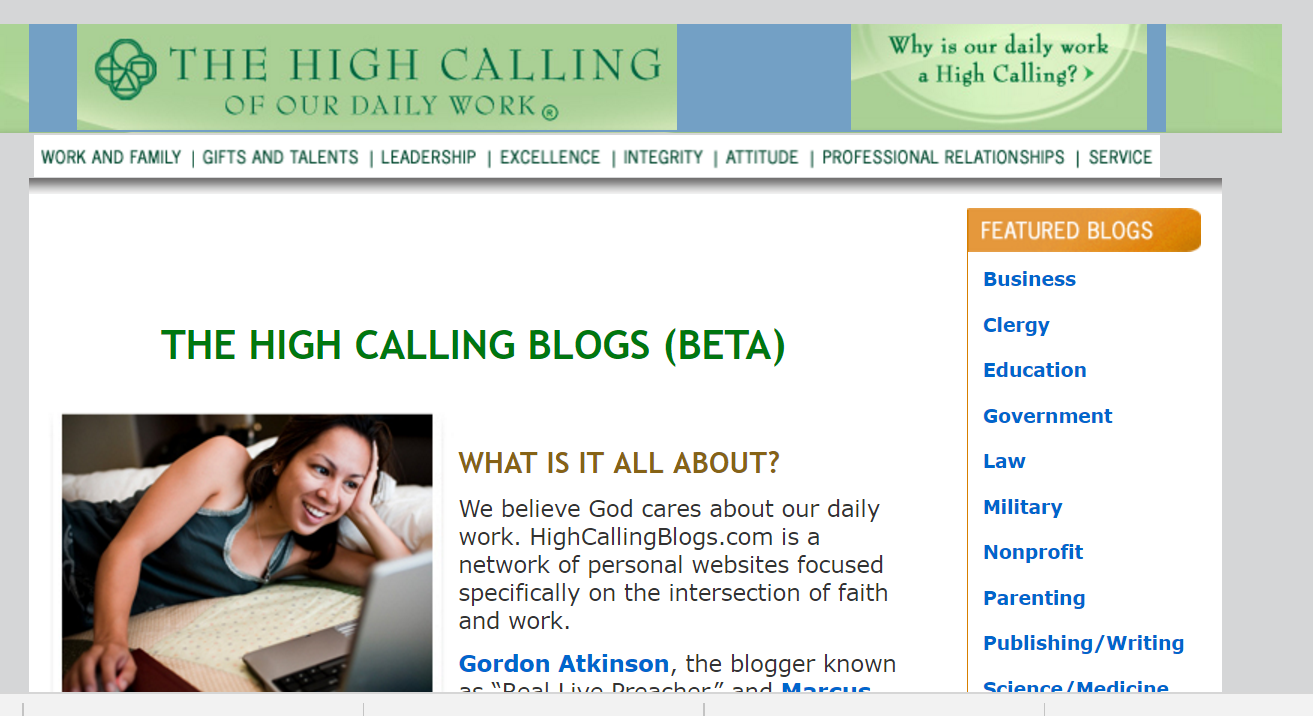 HighCallingBlogs.com launched in 2007 as a companion site to TheHighCalling.org. It’s been a steep learning curve—and the best part is that we’re stilling learning. The process brings an energy and excitement to what we do. As we’re on the brink of our new launch (combining TheHighCalling.org and HighCallingBlogs), I want to end this post with something I keep in mind. Each day we have more than one thousand unique visits to our sites. Those thousand people are searching for something, and we have a responsibility to deliver our message of encouragement and hope thoughtfully while seeking the guidance of the Holy Spirit as we move forward. In a future post, I'll outline our more recent history, with an emphasis on the High CallingBlogs community, and what our new merged site will offer.

Find God’s Next Step for Your Career

JESUS AND YOUR JOB

A video series on how Christians in different industries view their work. Hosted by Sean McDonough.

learn how you can use these free video small group studies

By Dan Roloff. Published by The High Calling, September 16, 2010. Image by The Wayback Machine.

© 2010 by The High Calling and the Theology of Work Project, Inc.